Josie Campbell is a 36-year-old from the small town of Watford, Ontario where she lives with her husband and their two boys Reid who’s 5.5 and Hayden who is 3.5 years old. She has served as the Secretary of the Canadian XLH Network since its beginnings. Josie is a proud teacher at St. Peter Canisius (in Watford). “St. Peter Canisius School in Watford is actually the school I went to as a child and now Reid is in Senior Kindergarten there. I love my job because spending time with children is so much fun. One of my favourite things about my job is teaching little ones how to read. Helping a child get to that ‘light bulb’ moment where they start to understand is an amazing feeling”.

Josie’s mom has XLH so it was an easy diagnosis for her at birth. Josie has three brothers and two of them were diagnosed with XLH early in life as well. The three of them endured many blood draws, doctor’s appointments, and thousands of doses of a medication called Neutro-phos through their childhood. Having three other family members with XLH has been helpful at times, they tend to book appointments on the same days to keep each other company, and they really understand what each other are going through.

At the age of 11, Josie was referred to an orthopedic surgeon due to the bowing in her legs. She was scheduled to have a full osteotomy done to try and alleviate the future knee pain she’d endure, but on the morning of her surgery the surgeon had a change of mind and opted to do a procedure where they’d staple the growth plates and help guide the new bone growth, to come in straighter. It was a great idea in theory but due to Josie’s age the surgery didn’t end up working as she was done growing by that point. About a year later Josie ended up having the full osteotomies on both legs which helped straighten things out, but an inner rotation would cause her to have external fixator’s put on (one leg at a time) to correct this rotation. By this point Josie was attending Kings at the University of Western Ontario, and it was a struggle at times managing all of the appointments and a full course load, she even struggled with infections, resulting in the early removal of one of the rods. Thankfully Guidance counselors, close friends and loved ones stepped in for support, her mom even made her a “Leg Mitten” to help protect her leg from the bitter cold, as the multiple metal rods protruding from her leg made for an extra bone chilling winter that year. It was a long road, but the external fixators did their job and corrected the rotation she had in both legs, and thankfully she has not needed any XLH related surgeries since then.

XLH has affected Josie’s life dramatically. Like many others, it affects her body from the time she wakes up, until she falls asleep at night, though she’s not the type to complain. Josie does her best to keep the disease from getting her down or stopping her from doing the things she loves. A new layer of XLH has been navigating through doctor’s appointments and medications for her two sons. Josie’s eldest son, Reid (5.5 years old) was diagnosed at 4 months of age and began treatment immediately, though he had some side effects with the conventional therapy. When he was 2.5 he started having tooth abscesses and ended up needing 4 of his baby teeth pulled. Hayden (3.5 years old) was diagnosed at about 4 months of age as well. Josie followed the process of Burosumab being approved for use in Canada and her family’s prayers were answered when in early June 2020 she got a phone call and found out that her family was approved for Burosumab through their private insurance company. Hayden was only about a year old, and Reid was 3 when they switched from conventional therapy to Burosumab. Since then, Reid’s legs have almost completely straightened out and he has grown over 12 cm! Hayden is growing well too and both boys are above average height which is a big feat for someone with XLH. Around last year at this time, Josie and her husband started to notice that Reid was not hearing the best. He was listening to the TV very loudly and needed things repeated many times. Sometimes they would be talking directly to him, and he would interrupt and say, “I can’t hear you”. They brought their concerns to Reed’s specialists, and he was scheduled for a hearing test and then eventually saw an Ear, Nose and Throat doctor. It was a long process due to Covid delays, but once they got a couple of hearing tests showing increasing loss, it was decided he should get tubes since he always seemed to have fluid on his ears. Getting the tubes put in helped almost immediately and it was a very simple procedure. “We are so grateful to our team of doctors at LHSC who helped Reid get his hearing back”.

“It has been amazing to read other people’s stories and make connections with other people with XLH. We even met up with a few people in our area. The XLH Canada Community has been great in sharing their experiences with different insurance companies, doctors and medications. We feel lucky to have this resource at our fingertips, especially for connecting with people in our area who also have children affected by XLH so we can advocate for the next generation together. I would love to see all XLH patients on Burosomab as soon as possible, and I hope to continue to see sharing of resources and knowledge within the XLH Canada group and beyond. We are our best source of resources and support. I would strongly recommend reaching out to the Canadian XLH Network if you are in need of support of any kind or putting questions out to the community to get new perspectives”. 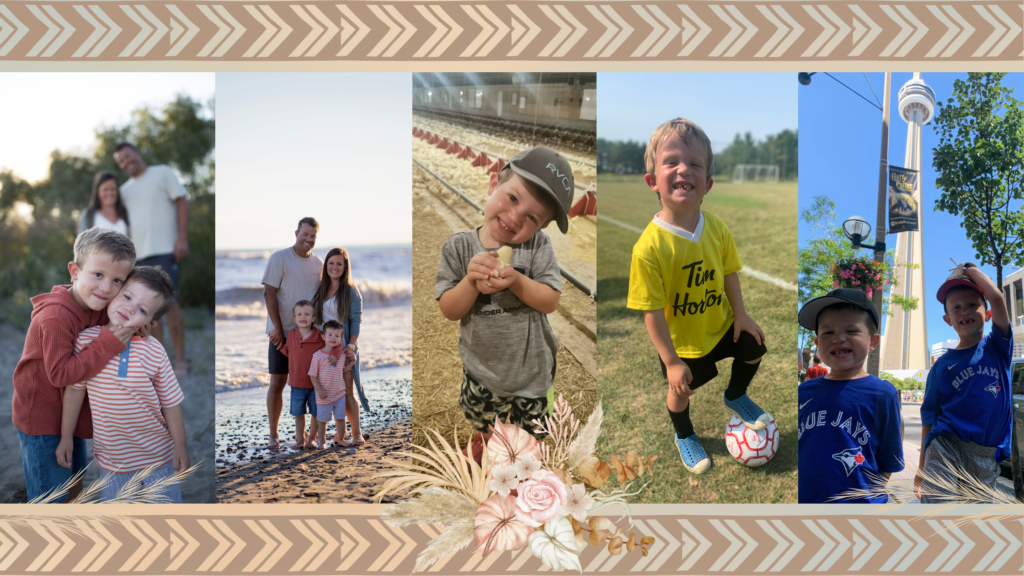